Exceptionally I’m writing this post in English. I’ve done quite a bit of research for this project and I was able to find some interesting bits and pieces here and there, but I didn’t find a lot of websites or posts where the whole process was written down carefully. I’m also not claiming that this is the only or the best way to do make a fixie, but it took me some time to figure out every step – so I figured I would write it all down and possibly reach a broader audience in English.

It all started when I began looking into buying myself a brand new fixie bike. There are a lot of sites where you can buy them. Most of the sites will allow you to change the colors of the bars, frame, handle bar, chain… with prices varying from € 270 to € 1200. Since I live in Brussels (more specifically the hellhole and home of jihadis Molenbeek) and bike thefts are not unusual (as in every big city), I felt a bit hesitant to spend so much money on a bike that might be gone the first time I chain it to a pole somewhere.

So I started kicking around the idea to make my own fixie. After all, it’s just a bike with some fancy shmancy wheels on it! The plan is to buy an old bike, recycle its frame, spray paint it and put some new wheels on it. Since the original idea was not to spend too much money on it, I need to set a realistic budget and try to stick to it.

There are three bikes I’ve been wanting to buy. To set the budget, I will take the average price of the 3 bikes. If I can keep my project below that amount, I’ve succeeded. The 3 bikes I’ve been looking at are:

The first thing I wanted to do was choose a bike frame. For a fixie, you need to have the typical frame of a racer, i.e. without a luggage rack welded to it. I looked into buying a new frame but very soon came to realize that it would take me way ov 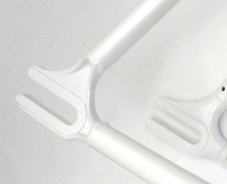 er budget. The frames I found started from € 150 – € 200. I then started searching for old bikes on second hand sites. The idea was to buy an old bike, strip it and sand it down to the bare metal. It takes a little bit more time, but it’s definitely a lot cheaper. In the end I found my bike for € 25! Make sure your frame is the right size and most importantly that the rear wheel is adjustable so you can put tension on the chain. It has to look like this.

2.1 Strip your bike to the bare metal

Get everything off. Wheels, brakes, chain, saddle, pedals… You’re gonna need to sand it down entirely so everything has to be removed.

How to remove/re-use your crank

Before we can primer/paint the frame in the colors we love, we need to remove all the old paint from the frame. There are three different ways to do this.

After you’ve sanded down the frame, you can spray-paint your primer. Before you start doing that, you need to degrease the frame. Just ask for degreaser in your local hardware store. Put some on a cloth or kitchen paper and rub the frame clean. Personally I used kitchen paper because it doesn’t leave fluffs.  Be sure to always wear (latex) gloves when touching the frame cause the grease on your skin will withhold the paint from attaching. When you use spray-paint, hold the bottle 20 to 30 cm from the frame. Start spraying away from the frame and then in a one, swift movement slide over the frame and repeat. You are going to have to do this in multiple layers! It’s impossible to do it in one go.

Respect the drying time, don’t touch the frame with your bare hands, don’t turn it around before it has dried. 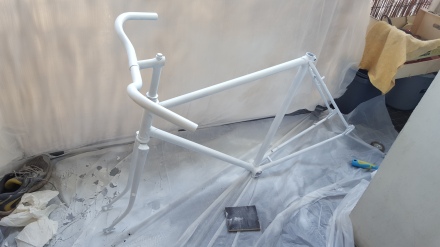 I don’t have too much space in my apartment, but I managed to do it perfectly on my balcony. I just put a plastic cover on the ground and one on the balcony wall (to prevent damaging cars in the street with the mist and to prevent the wind blowing any dust inside).
In the end, my frame looked like this.

After you’ve coated the frame with primer, you can start coating with your lacquer color of choice. If you want to use different colors, make sure to cover up the things you don’t want to spray-paint. Use the same technique and patience as with the primer.

When you’re finished coating the frame with the lacquer of your choice, add a last coat of colorless varnish to protect the lacquer from damaging and rust.

I threw all the old stuff away and used the frame as a clean canvas. If you paid attention while you were stripping the bike down, I’m sure you will be able to reassemble it. If not, there are good instruction videos to be found on YouTube for each step of the way. I ordered all my stuff on singlespeedparts. They are very helpful, reply quickly to questions and ship abroad. They even have an excel file on their site that you can use as an order form. All the parts you need are on it. You just need to fill in the one you need.
Be patient every step of the process. Any mistake could leave you with a scratch and a ruined day… (I’ve had to resand/repaint one bar when I slipped with my wrench while fastening the bottom bracket.)

The moment of truth… As stated in the beginning, the project would be a success (financially) if I stayed under € 402. I’m happy to say that I did it for € 345,34. It took me a lot of time (3 weeks but I only worked evenings and each layer of paint needs to dry for 24 hours) but when people tell me it looks nice, at least I can tell them I did it all myself. Let’s just say that the experience is priceless. On the other hand, I spend € 80 on equipment (wrenches, bolts,  chain tool…). I’m not adding these costs to the costs of the bike since I can use these tools for a lifetime. I also saved some money on the wheels. They’re worth €200 but I only paid €110 since 4 spokes were a little damaged in transport to the supplier. They were honest about it and made a fair price. You won’t notice it if you don’t know where to look.

I’m really happy I decided not just to buy one but instead doing all the work myself. It was a fun experience, even though my girlfriend had to stand bike frames and parts lying around in the house everywhere. I’ll proudly ride it throughout Brussels and can only pray it won’t be stolen too soon. 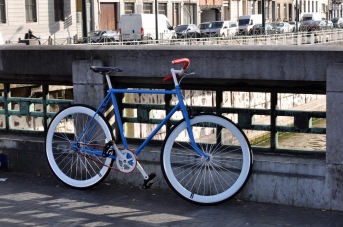 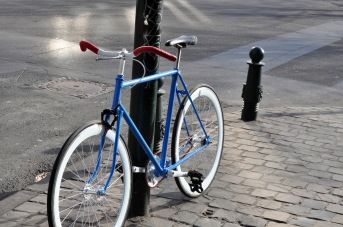 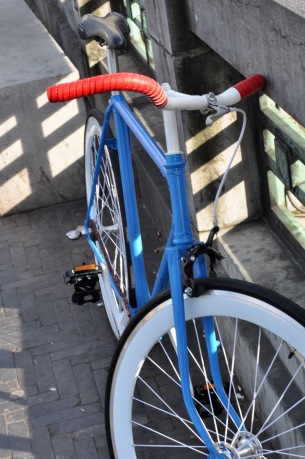 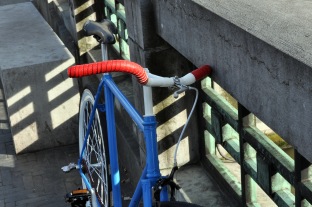 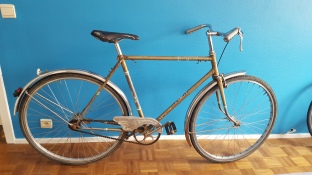 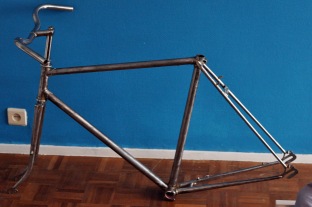 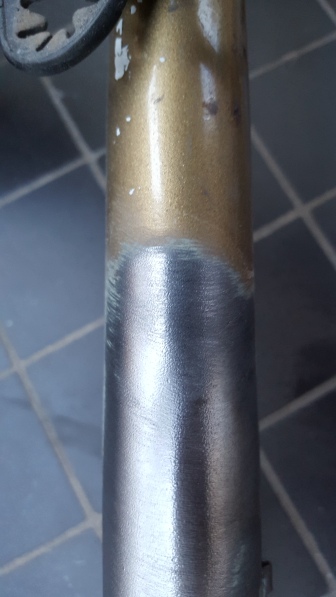 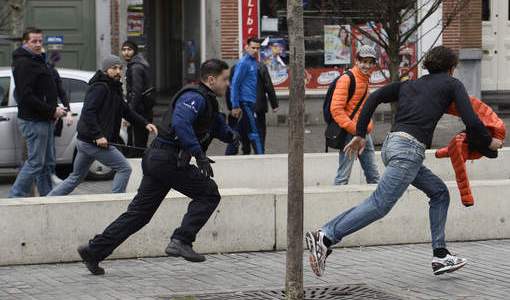 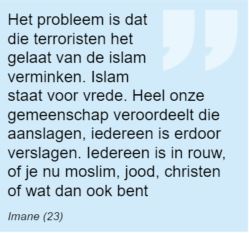